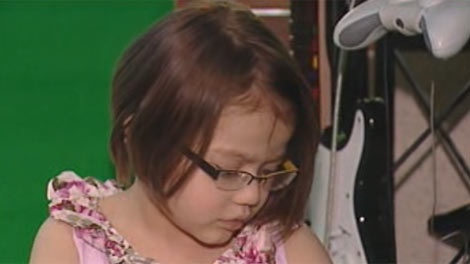 Sophie’s journey began when she was diagnosed with blood cancer when she was two years old. Following chemotherapy, a Winnipeg cardiology team determined that her heart’s left side had been severely damaged (a condition known as chemotherapy induced cardiomyopathy). For treatment, she was transferred to Stollery Children’s Hospital. Sophie was put on the waiting list for a heart transplant after doctors implanted a Berlin Heart in 2009.

At the time, Sophie Upton was the longest-standing pediatric patient in North America kept alive on a Berlin Heart, a device that uses an external pump to perform heart function. It is given to children who are waiting for a heart transplant or who are recovering from heart failure.

Doctors regularly monitored Sophie’s damaged heart function while she waited for a donor heart at the Stollery. When doctors determined Sophie’s heart had healed, she underwent surgery to remove the Berlin Heart and restore her heart’s natural function.

According to medical literature, approximately 5% of patients on the Berlin Heart can be successfully weaned off the device, and in the majority of these cases, the heart heals itself within three to five months.

Sophie and her parents, Edward and Ning, looked forward to going home. “We’re going to be transferred from the Stollery to the Winnipeg Children’s Hospital. We’re looking forward to meeting the health care professionals there,” said Ning, “Sophie will be closer to family; she can go to kindergarten and live a normal life.”

Dr. Buchholz says health teams in two provinces scripted this happy ending. “This case is a good example of the collaboration between Winnipeg and Edmonton cardiology teams working together as part of the Western Canadian Children’s Heart Network to deliver the best possible outcome for the patient,” he noted.

Sophie was finally able to go home at the age of four, after spending nearly two years at the Stollery Children’s Hospital. Her family has remained positive over the years, and her father, Ed, even had a positive message to pass along: “when things look bad, remember that they can get better quickly.”