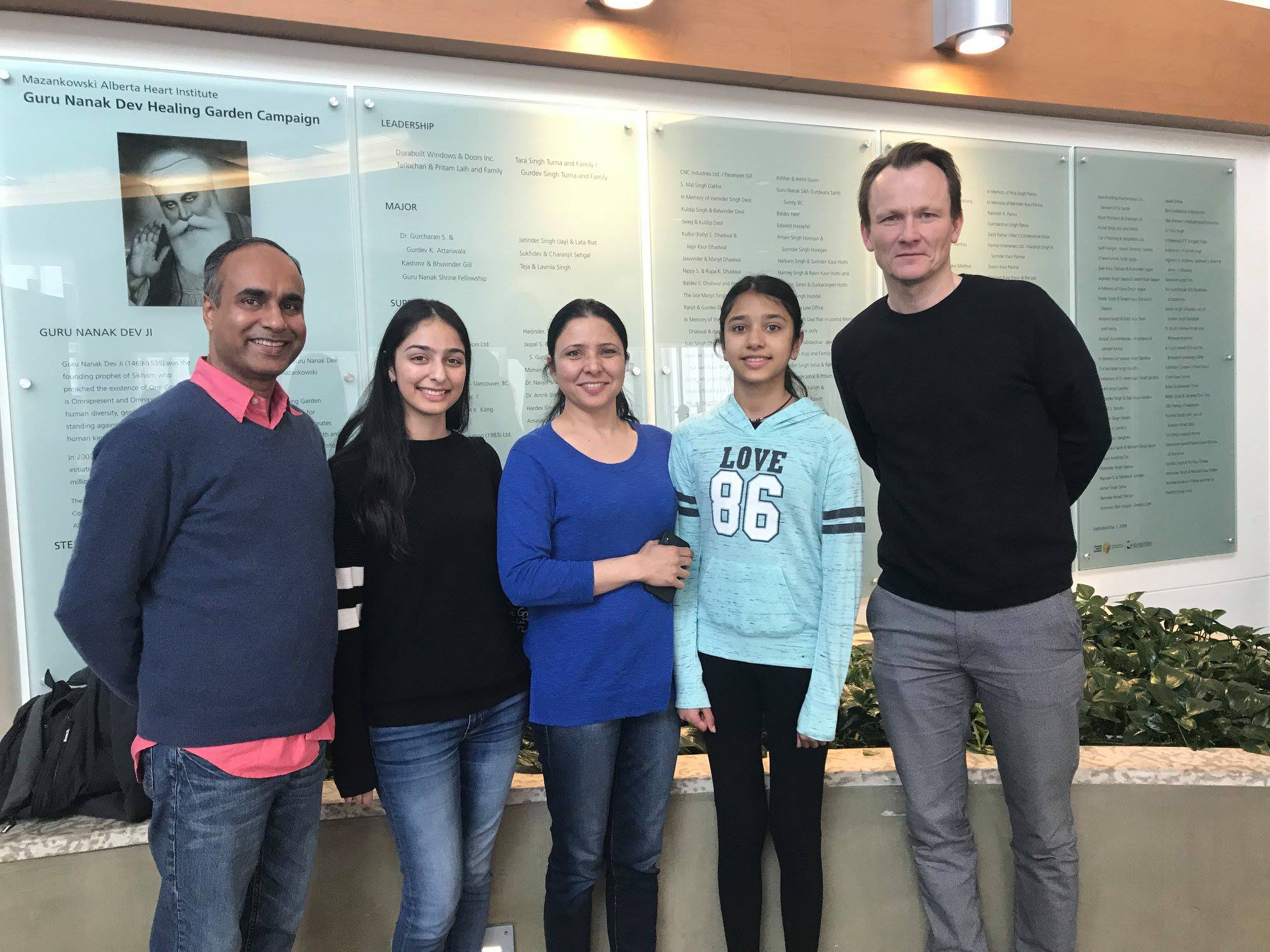 At 10 days old, Muskaan Grewal had been settling into her new home in Surrey, B.C., with her father, Harman, her mother Sukhjit, and her six-year-old sister, Karina. The initial health she had radiated at birth began to fade. Worried, Muskaan’s parents took her to the family doctor, who suggested they bring her to the emergency room; something was wrong with her heart.

Doctors admitted Muskaan to the Intensive Care Unit, where she underwent hours of testing. Her family gathered in the waiting room, certain that they would be greeted with reassuring news.

“Her heart is like a nut and it’s not pumping enough blood,” Harman recalls hearing from the doctor. She suffered from a rare heart condition called dilated cardiomyopathy that affects one in 100,000 live births each year. Muskaan would need a new heart.

Dr. Holger Buchholz of the Stollery Children’s Hospital in Edmonton, Alberta knows a lot about little hearts. When all other options have been exhausted and a child with a failing heart is too sick to wait for a heart transplant, he is the person to call.

Dr. Buchholz studied cardiovascular surgery in Germany before being flown in by the Stollery in 2005 to assist in the installation of the Stollery’s first Berlin heart, the world’s first mechanical heart designed for children. Months later, he was asked to lead the Stollery’s ventricular assist device (VAD) program.

A VAD is a mechanical pump that circulates blood throughout the body to support a damaged or failing heart. Dr. Buchholz manages about ten paediatric patients per year, the majority of whom are treated with a VAD until they are eligible for a heart transplant. Implanting a VAD allows the patient’s organs to grow healthier, resulting in lower admission and hospitalization rates. Most importantly, the patients are in better shape when they undergo heart transplantation, which reduces their recovery time.

Medical technology advancements in the last two years have resulted in a new type of long-term, permanent treatment known as Destination Therapy, which is intended for patients who are not candidates for a heart transplant. The HeartWare pump is used in this treatment, which is no bigger than a golf ball and can be implanted in patients weighing more than 20 kilogrammes. The Stollery was the first hospital in Canada to implant a HeartWare pump in a pediatric patient in 2011. The 13-year-old patient wore the four-pound controller in a carrying case strapped to her back.

Following the initial discovery of Muskaan’s condition, they relocated to Toronto so that doctors could test medications on Muskaan. She gradually responded to the treatment, and the family was able to return to the West Coast within a few months. From then on, each passing day meant a better chance of receiving a heart transplant. However, a heart didn’t come soon enough and, at the age of five, Muskaan suffered a blood clot that went to her heart. Doctors told the family they would need to fly to Edmonton.

It was there that they met Dr. Buchholz and Selvi Sinnadurai, the Stollery’s VAD program coordinator. Together, they guided the Grewal family through the extensive consultation process.

Muskaan had surgery the following week. The Stollery’s chief pediatric heart surgeon, Dr. Ivan Rebeyka, implanted the HeartWare pump in her left side and stitched a portion of it into her heart’s left ventricle. A small tube ran through her upper abdomen’s skin, connecting to an iPhone-sized controller.

The device’s alarms made her anxious and kept her awake at night, but she knew they were keeping her alive. Her family went through 25 hours of training, learning how to read the monitor’s numbers and change the battery pack every five or six hours.

Muskaan was ready to return home by December 2012. Selvi and the family flew to Surrey to train Muskaan’s school teachers and collaborate on an emergency plan with the local hospital. In addition to fire drills, Muskaan’s classmates practiced VAD drills. When Selvi returned to Edmonton, the family kept in touch with the Stollery’s VAD team on a daily basis.

Muskaan was readmitted to the Stollery in May 2013 after another blood clot, this time to the brain. While at the hospital, Dr. Buchholz inquired as to Muskaan’s willingness to receive a new heart right away. “I want it,” Muskaan said, before breaking down in tears.

After a gripping 10-hour stretch, Muskaan’s heart transplant was a success. Within four days, she started to walk again. After two weeks, she was discharged from the hospital. But before embarking on their flight back home, the Grewal family learned something remarkable: HeartWare, the company that manufactures the pump, stated that she was the world’s youngest patient to receive the device.

Instead of a quiet exit, Muskaan and her family said their goodbyes to a throng of hospital staff and reporters in early August. As the cameras flashed, Muskaan clung to her parents who smiled proudly, admiring the little girl with the big heart.

Muskaan had a heart biopsy a few months later, in December 2013, to see how her body was coping with the new heart. It registered a level zero, indicating that her body has almost no chance of rejecting her new heart. From there, the family worked towards getting their lives back on track.

The Grewal family does miss one part of their past life: the Stollery staff. Last September, Harman and Sukhjit penned a letter to Buchholz and Sinnadurai. “Dr. Buchholz holds a very special place in Muskaan’s heart,” they wrote. “Through Muskaan’s eyes he is seen as a superhero, who is always to the rescue, has the solution to everything, and can make the impossible become possible.”

Today, the Grewal family is able to count Muskaan’s life in decades to come, and are looking forward to creating more memories. Memories like Muskaan riding the ghost train in Stanley Park for the first time, jumping out of bed early for her first morning of Grade 2, and finally getting the one present she had wished for every Christmas: a healthy, working heart.

Adapted from “The Measure of Muskaan” by Alex Migdal, Winter 2014
Return to Family Stories