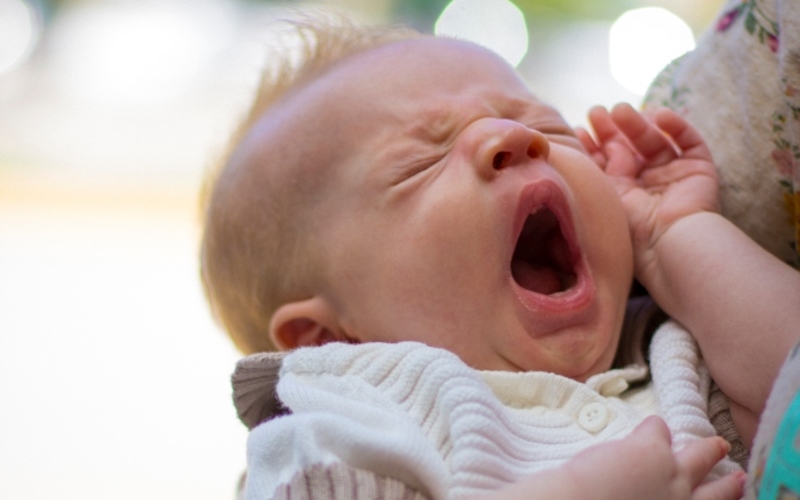 Elizabeth Van de Polder was overjoyed and relieved when she finally got to hold her baby boy Kelso without any wires or tubes attached to his tiny body.

Elizabeth is sitting in a comfy chair inside the living room of her South Surrey home on a sunny May afternoon, with Kelso sleeping peacefully in her arms. The calm and serenity of the setting seemed like a distant dream until recently, as Kelso had a tumultuous first week and a half of life.

Kelso was born at 6:12 p.m. on April 16. The next morning, as his parents prepared to take him home to meet his older sister Zoey, a nurse noticed an unusual heart murmur. He was taken to BC Children’s Hospital for evaluation and was diagnosed with a rare heart defect (aortico-left ventricular tunnel) that required surgery.

Kelso was only six days old when he underwent a delicate four-hour heart surgery.

“It was terrifying,” says Elizabeth, recalling how she and her husband Steven clung to each other, and to a sense of hope, after watching their baby disappear into the operating room at BC Children’s Hospital. Even though Elizabeth and Steven were noticeably anxious, they were confident Kelso was in good hands.

Every year, the BC Children’s Heart Centre’s talented and highly trained team performs around 300 operations on infants and children with a variety of congenital and acquired heart defects. The centre is one of two surgical sites within the WCCHN, providing treatment to children from all over Western Canada.

The team is led by surgeon Dr. Sanjiv Gandhi, who has played a key role in expanding the centre’s programmes and enhancing its reputation as one of the top surgical sites in North America.

When the Van de Polders first met Dr. Gandhi, they found the surgeon’s demeanour to be both positive and reassuring. “It gave us confidence,” Steven says.

A rare condition that required surgery

Dr. Gandhi describes Kelso’s condition as aortico-left ventricular tunnel, which is extremely rare. In fact, he has only seen three similar cases in his 20 years as a surgeon.

“[It is a heart defect] in which there is a connection between the aorta, which is the blood vessel that supplies blood to the body, and the left ventricle, which is the heart’s main pumping chamber,” he explains.

The only way to correct the defect is through surgery. Because a baby’s heart is only slightly larger than a walnut, operating on an infant rather than, say, a 10-year-old child presents additional challenges for the surgical team.

Dr. Gandhi explains that, aside from the obvious difference in size, the other differences have to do with the heart itself. “Because the heart muscle is much more immature, and thus delicate, in infancy, it doesn’t tolerate stress very well. So you have to execute operations with precision.”

Dr. Gandhi understands the emotional turmoil that parents face after receiving such a shocking diagnosis, and he tries to connect with them as a parent himself in order to build trust that extends beyond the typical surgeon-to-patient relationship.

As Kelso underwent surgery, the Van de Polders were given a beeper that would sound when the procedure was complete. To take their minds off the surgery, the worried couple strolled hand-in-hand through nearby Queen Elizabeth Park.

“We knew it was going on, and there was no point in bringing it up,” Steven recalls.

When the device began beeping hours later, they returned to a waiting room for parents inside the Pediatric Intensive Care Unit. Dr. Gandhi arrived quickly to deliver the good news: Kelso’s heart operation had been a success. “My heart began to beat again,” Elizabeth recalls. “You can’t explain [the feeling].”

Three days later, a healthy Kelso was bathing with his parents and sister at home.

“The [heart] murmur has gone,” Elizabeth says as she runs her fingers through her sleeping baby’s hair.

For Dr. Gandhi, working with children like Kelso is what drives him the most. “The best part of my job is when kids like Kelso come home in great shape and live happy and normal lives,” he says. “There’s nothing more valuable than that”.