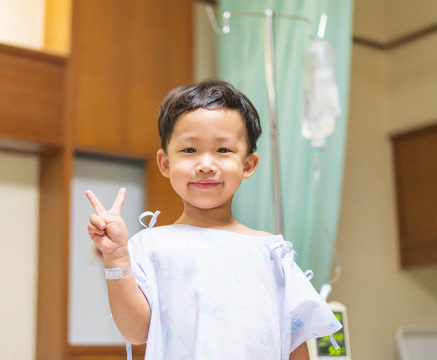 Grandma and Grandpa Blaber came to stay with his sisters Brittany and Courtney, and the dogs Sandy and Peanut. We gained an hour in time when traveling to Alberta, but it was dark when we arrived. It took some time, but we finally found the Campus Tower Suites!

We were at the hospital at 8 a.m. Lots of tests were done and Cindy was the one to get us through them. The name tag and blood type bands were put on. There was special bath soap we had to use for Dylan’s next 3 baths; 2 on Monday and 1 on Tuesday morning.

A very early morning bath and off to the hospital for 6 a.m. Surgery (to treat Complex VSD) was at 7:30 a.m, so it was a long wait for mom, dad, and grandma. At noon the doctor came by the fish tank to talk with them.

Dr. Rebeyka said all went well and Dylan would be brought to the Intensive Care Unit. For 24 hours, he was on a breathing tube and kept very sedated. Then the tube came out, and over the next few days, one by one, other tubes were removed. He progressed well. The nurses were with him night and day. There were lots of wires, tubes, and monitors beeping.

Dylan was moved to the 4th floor and to a very nice private room where his mom could stay with him all night in a bed next to his. There were more tubes, but he was beginning to sit up and watch TV, so he was happier. He was starting to eat, but not all food looked or tasted too good as he had 9 medicines to take too, and they sometimes made his tummy feel sick.

He had a fever, so more medicine to take. But, he had a surprise that day – a cowboy hat, t-shirt, and bandana from the rodeo association. Now he can be a real cowboy when he goes home.

Out of bed and in a wheelchair, he went to the beach playroom. Food was tasting better as the days passed.

Dylan had x-rays and more blood work to see why he had such a bad rash. There was too much tape and his skin was sensitive.

Tests showed fluid around the heart, so a couple more days in hospital. More medications.
Mr. Potato Head came for a surprise visit. He was so big he could hardly get in the doorway.

Later that day, another surprise – Chris the dog stopped in to see him. Chris was a very big but gentle dog. We had a little visit and he went to see others in the hospital, too.

Dylan was moving very well. Now on and off the bed and playing with toys in the two playrooms and air hockey with his dad.

Dylan picked a stitch and it got a little infected, so more medications for that and a dressing put over it. They told us to stay another 2 days.

Dylan knows his way around. We go for walks and even go to the kitchen and make a peanut butter sandwich if he wants one.

We are being discharged and it takes until 4 p.m. to get going as the doctor has to see him and paperwork needs to be done. Then a dressing change, lunch, and prescriptions to fill – so it took a long time.

We also had to make sure we got all the autographs we could on his t-shirt.

We only made it to Lloydminster yesterday. Still 5 hours from home. Had a restless sleep in the hotel room. 13 days on the road and going to make it home today!!

The dogs and girls are at the farm with grandma and grandpa until Sunday – so sort of quiet when I got home except for the table full of helium balloons and gifts!!

The only thing left is to be on the road to recovery at home.

This story was written by Dylan’s mother.
Return to Family Stories